As part of the BBC Young Reporters programme, Harris Academy Battersea were gifted 30 tickets to the pre-screening of the first episode of the latest season of Doctor Who – meaning that our students would be some of the first in the country to see this episode – nearly two weeks before it aired to the public on New Year’s Day!

Both Year 7 and Year 8 students were encouraged to enter our school competition in which they were asked to create Doctor Who-inspired artwork in order to win a golden ticket to the event.

The lucky 30 students travelled to the BFI Southbank with eager minds and hopeful hearts with myself (Miss Regis), Miss Williamson and Mr Reid – unaware of just how magical this experience would be.

On arriving at the BFI, as we were the first, we were registered, set up with wrist bands and entered the screen before any other school (see below).

Edge of our seats

Gradually, other schools began to filter in and the anticipation grew as the unveiling of the latest episode of Doctor Who crept nearer. After a quick introduction from the director of the episode, the screening began.

Laughter, gasps and glass-cold stares – it truly had us on the edge of our seats – then before we knew it, the episode ended with a cliff-hanger, revealing that it was the first of a two part episode!

The room grew lighter and the audience erupted in applause and whoops as the Production Designer, Assistant Production Co-ordinator, SFX Supervisor and a Line Producer ascended the stage. The students then welcomed the opportunity to throw and catch the wireless cube microphone to ask questions about the production, visual effects and acting in the episode.

Meeting the first female Doctor Who!

"What are you lot talking about?" A call bellowed from the back of the screen room and Jodie Whitaker (aka The Doctor) came leaping down the stairs – the room sang with elation from the students. An unexpected visit from the first female Doctor! 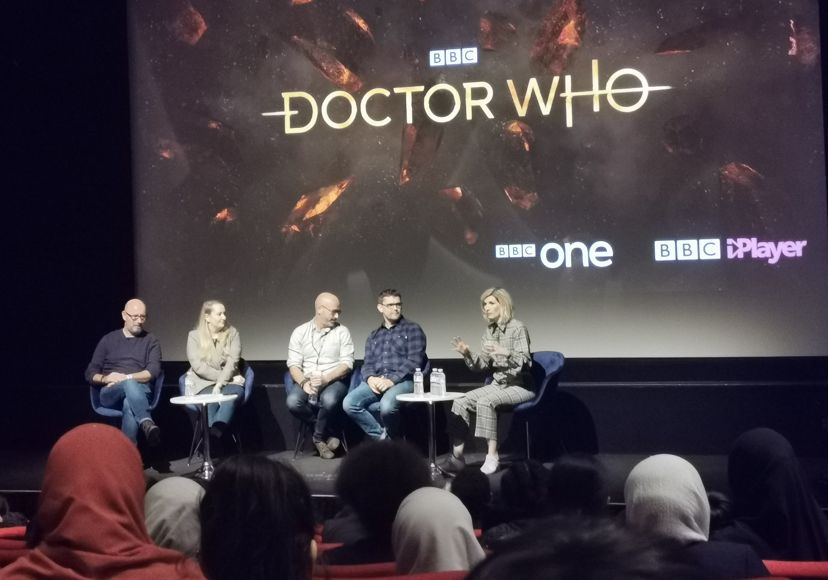 Whitaker was posed with questions from the students (above) – ‘What’s it like being the first female Doctor?’ ‘What is your favourite monster?’ ‘How did you get into acting?’

A truly magical day and an invaluable experience for our students being able to converse with and question such a high-profile actor and production team about paths into the entertainment world and the world of science - great motivation to further their education at Harris Academy Battersea.