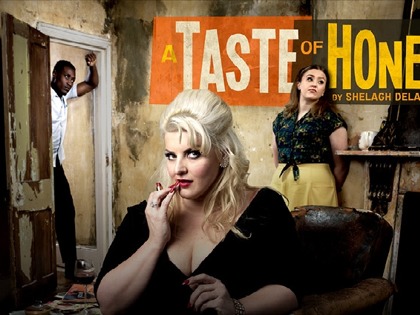 Our A Level History students visited the National Theatre recently to see the latest production of Shelagh Delaney’s ground-breaking British classic A Taste of Honey.

A Taste of Honey is a gritty depiction of working class life in post-war Britain and an exhilarating portrayal of the vulnerabilities and strengths of the female spirit in a deprived and restless world. Shelagh Delaney’s taboo-breaking play, written when she was just 19, was later adapted into a BAFTA award-winning film.

When her mother Helen runs off with a car salesman, feisty teenager Jo takes up with Jimmie, a sailor who promises to marry her, before he heads for the seas. Art student Geoff moves in and assumes the role of surrogate parent until, misguidedly, he sends for Helen and their unconventional setup unravels.

Students found the play a provocative and engaging way of immersing themselves in the culture of the 1950s. The societal shifts and changes displayed in this play are a key element of their Making of Modern Britain 1951-2007 course, which is studied in both years 12 and 13.